Welcome to the Sea!!!

Let’s start by saying I don’t listen to a lot of metal and until very recently thought the genre of pirate metal was used just for describing Alestorm. In great news there are quite a few bands flying the Jolly Roger high for pirate metal across the world.

Today (9th Feb 2018) see the debut release of “The Triumph of Piracy” by North Carolina 4 piece Rumahoy on Napalm Records. 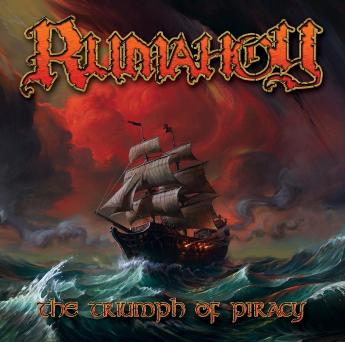 The Triumph of Piracy is just that a triumph! The album seamlessly blends heavy metal with classic sea shanties and a whole lot of rum. Imagine if you will Lamb of God and Hans Zimmer working together and you wont be far off.

Rumahoy as a band have a sound much bigger and complex than you would ever think possible for a 4 piece with a classic thrashy metal back bone finished off with a screaming guitars and tales of both the classic and modern day pirate.

The stand out tracks from the album are for me personally the first single “Forest Party” (video link below) and “Huffman, The Pirate King” which are probably the least heavy songs on the album and closest to traditional pirate music with a polka / sea shanty feeling to both of them.

My favourite song from the album will have to be “Netflix and Yarr” a ballad of the life of a pirate not being what it used to be and the struggles of being a pirate in a modern world. Just brilliant.

The biggest shock when listen through was when the track “Pirateship” came on and I was convinced that my pc had decided it wanted a change from Pirate Metal for a bit and decided that 90’s euro techno would be a better choice, but no it was still Rumahoy. Sang almost entirely in what I think is German (I speak no German, it’s a guess) “Pirateship” is a shocking piece of genius which I can see becoming an obsession as it sounds like the “Scooter goes pirate metal” album that never existed (to my knowledge).

The album finishes with the title track “The Triumph of Piracy” a 10 minute epic that if you wanted to introduce someone to pirate metal would be a great start and if they don’t like it make them walk the plank you don’t need those people in your life.