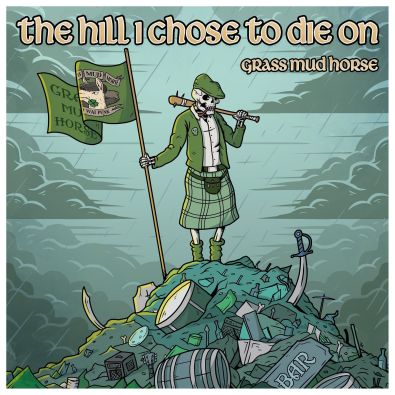 For all the history that is intertwined with Liverpool and the Emerald Isle, it’s inevitable that the music passed down the years and played in the pubs for generations would influence the steady stream of bands and songwriters from the banks of the Mersey. Now, one of the sons of that grand auld city is making waves in the celt-punk scene with Grass Mud Horse, although the band doesn’t come from Scottie Road or Toxteth, but from the northern regions of China.

Liverpudlians, just like the Irish that populated the city, get all over the world, and Grass Mud Horse are a perfect example of this wanderlust. Fronted by Liverpool native and songwriter Chris Barry (guitars, mandolin, tin whistle, and more), GMH are completed by Rocco Desta (bass) from Glasgow and Will Wyld (drums) from Texas; and are based in the city of Qinhuangdao, at the end of the Great Wall. GMH have already released two singles in the humorously observant “Christmas Time In China” and the pirate punk “No Prey, No Pay” (with the music video being exclusively launched by our good mates London Celtic Punks). Chris has recently found time to record an acoustic EP, “The Quarantine Sessions” despite being in lockdown with only a few instruments and a small 8-track to record on. With this impressively stubborn creative streak, they’re about to unleash their new single “The Hill I Chose To Die On”, and it’s a belter.

Taking all the best ingredients of celtic punk, they effortlessly create nearly two and a half minutes of high energy and an infectious melody that gets stuck in your head for days; with the blend of guitars, drums, tin whistle and accordion producing a track that would fit seamlessly into the repertoire of any of the best bands in the scene. Inspired by an online argument Chris had seen, and delivered perfectly by his snarling vocals, the song looks at the current generational war being raged across social media from the perspective of an older fella who feels that his surroundings are changing too quickly and he isn’t getting the respect he deserves from the young ‘uns:

“…It was a facebook fight! Two keyboard warriors where going at it, calling each other “millenial”, “boomer”, “gammon” etc.  Somehow that whole thing with the bakery refusing to make a cake for a gay couple had come up again and the “millenial” posted about how he was amazed that this was the hill so many “gammon”, “boomers”…(or whatever I can’t remember exactly)….chose to die on. I’d heard the phrase before, but it hit me that in the context of this “generation war” that’s going on, it was very poetic and I grabbed me notebook and starting writing…. ”
Chris on the inspiration for The Hill I Chose to Die on – Apr 2020

Despite the song being written from this viewpoint, it’s not intended to endorse or condemn either side of the argument, it’s an attempt to document the current generational tensions that are evident all over social media every day. It’s this sort of insight from Chris’ songwriting, along with the brilliant musicianship of the band as a whole, that shows that Grass Mud Horse could well be a major contender for the next big breakout band in the celt-punk scene. A full length album release would be eagerly awaited.

(Click the Spotify link to automatically save it to your playlist)